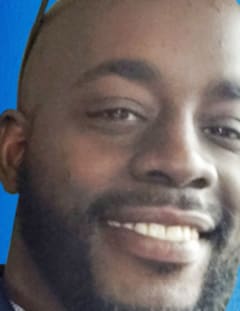 Marcus Ricardo Myles was welcomed into the world on February 8, 1987, in Augusta, Georgia, to the parentage of Rosa A. Myles and Michael A. Myles. On Tuesday, March 23, 2021, Marcus was received by the Lord after being here on earth for 12,462 days.

As we say in our family, Marcus will be Marcus! The youngest of three children (Team Myles), Marcus marched to the beat of his own drum. He was beautifully complex, yet simplistic in nature. A man of very few words, when Marcus spoke, his voice commanded your attention. An old soul who was wise beyond his years, and known for his intelligence and quick-wit, you thought twice before coming to him with “silly” talk. Yet, he will be most remembered for his huge heart, infectious laugh, and that beautiful smile that warmed every room he entered. He was the perfect person to balance any environment. The life of the party, the cool kid with the shades and swagger. Marcus loved watching the National Geographic Channel, The Weather Channel, and the local news. To say he was a car fanatic would be an understatement.

A Native of Augusta - Richmond County, Marcus attended Barton Chapel Elementary, Glenn Hills Middle School, and graduated from Glenn Hills High School in 2005. The consummate athlete, he played football, basketball, and was an avid golfer and swimmer. After high school, Marcus continued his football career at Eastern Arizona College and Mars Hill College before transferring to Kennesaw State University, where he received a Bachelor of Science degree in Health and Physical Education.

Marcus gave his life to Christ and joined Greater Travelers Rest House of Hope in 2008.

After college, Marcus moved to Florida after accepting
a job as a Field Engineer in the construction industry and quickly climbed the corporate ladder, becoming a project manager. In 2017, then he relocated back to Georgia to be closer to family, friends, and his girlfriend, Alycia.
Marcus is survived by: his loving wife, Alycia Jenkins Myles of Covington, GA; step-son, Julius Jenkins of Covington, GA; parents, Michael Antonio Myles, Sr. and Rosa Thompson Myles, both of Augusta, GA; sister, Michanda Alicia Myles of Washington, DC; brother, Michael Antonio Myles, Jr. of Augusta, GA; grandmother, Annie Thompson of Orlando, FL; godmother, Velma Scott of Augusta, GA; and a host of aunts, uncles, cousins, and friends.